New York may be known to most as the place of the big city, but for many anglers, it has plenty more to offer than that. New York is a great state to head to in the winter for ice fishing, as it gets plenty cold enough to offer many different ice fishing opportunities.

While most native New York anglers will say that ice fishing is not as good as it used to be, there is plenty of great places to fish and plenty of large fish to be caught. This state is home to many different species of fish, and there is genuinely something here for everyone.

If you love ice fishing and have never visited New York, you owe it to yourself to make a visit and see what the Empire state has to offer. Here are our picks for the top locations for the best ice fishing in New York.

You cannot mention ice fishing in New York and not bring up Lake Champlain. This large lake is often referred to as the sixth Great Lake and offers plenty of ice for anglers to spread out and explore.

Lake Champlain is very popular among ice fishermen because it also offers both warm and cold water species to fish for, including smelt, walleye, pike, perch, salmon, lake trout, rainbow, and brown trout, muskie, crappie, and even some pickerel. There are plenty of different species to pursue, each with its own set of challenges and availability.

Another great factor about Lake Champlain is its accessibility. It is very easy to find and to access all of the ice, making it a great choice for experienced and beginner anglers alike. Not to mention it has some very liberal bag limits; this lake is guaranteed to be a great time on the ice.

Oneida Lake continues to be one of the most popular fishing lakes in the entire state, and it is no different during the winter months as well. Anglers flock here when it ices over to pursue its large numbers of walleye.

With above-average populations, the walleye is the star at Oneida Lake during the winter, but many anglers will also catch bass and perch as well. Large walleye are no surprise here; many fishermen come here specifically to catch trophy-sized fish.

Located north of Syracuse, access to Oneida Lake is very good. Try Three Mile Bay or Toad Harbor for the best places to get on some ice as quickly as possible. Lake Oneida is definitely one to consider if you are ever in the area.

Chautauqua Lake is one of the most popular ice fishing lakes in New York and is found on the western side of the state. It is famous not only for the number of walleyes it holds but also for the size it grows them to.

Most ice fishermen after these walleye can be found in the northern basin, where there is deeper water and better habitat. In addition to big walleyes, Chautauqua Lake is also home to plenty of perch and crappie as well.

Chautauqua Lake can be found between the towns of Jamestown and Maryville in southwestern New York. The two best places to access the ice can be found at Bemus Point and Prendergast Point, both of which offer plenty of parking and the ability to find some ice to fish on well away from other anglers.

Lake Ontario has plenty of bays and inlets that offer some truly world-class ice fishing, and there is even a hotspot known as the Golden Triangle that is known to be the place to go for the best ice fishing on the lake. This can be found between Henderson Bay, Chaumont Bay, and Guffin Bay.

See also: Cost of Skis: (How Much Do Skis Cost?)

Most anglers will head to Lake Ontario in order to target pike, panfish, and perch. The relatively low water depths allow the ice to form more quickly in the year than other places and is a great place to head to in order to find good numbers of perch.

The only downside to Lake Ontario is that access can sometimes be a little challenging. Many anglers will find the best access points at Sodus Bay and Sandy Pond, although there are plenty of other smaller access points if you know where to look.

For the best perch fishing in New York, look no further than Lake Eerie. There are great populations of the fish, as well as plenty of big walleye to be found as well. Sturgeon Point is generally considered to be the best access point and fishing here.

Finding the best perch fishing can often lead to traveling long distances on the ice, so it is usually recommended to have a snowmobile or ATV in order to travel and find these hotspots. It should also be noted that the ice can be very dangerous at times because of Niagra River currents.

Anglers who want to fish Lake Eerie should take caution and check ice conditions before heading out. Those who do decide to brave the elements and the ice will be rewarded with some of the best perch fishing found in the eastern United States.

How Much is a Fishing License in New York

Anyone who wants to fish in the state of New York must first obtain a fishing license. There are multiple different licenses to choose from, all at varying price points.

For more information on licenses and fees, please visit the New York State Department of Environmental Conservation’s website at https://www.dec.ny.gov/permits/6091.html.

Where to Buy a Fishing License in New York

The easiest way to obtain a fishing license in New York is to visit the Department of Environmental Conservation’s website and purchase your license directly online. If you would prefer to purchase a license in person, you can either visit one of their offices or one of their licensed vendors that are found all over the state. Anglers can visit https://www.dec.ny.gov/permits/95448.html for an interactive map to find vendors in their area.

New York may be famous for many things, but don’t let them all distract you from the amazing ice fishing opportunities that can be had here. It is a very popular activity among native anglers in the area, and for a good reason. If you have ever thought about visiting New York, especially during the colder months, you will not want to forget your fishing gear! 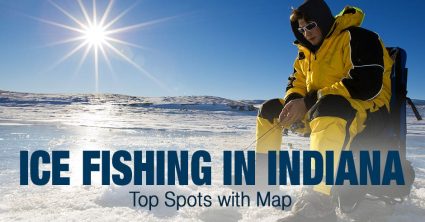 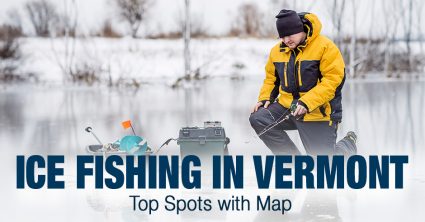